You might argue that the kernel never crashes. Unfortunate that is not true. Kernel crashes might be caused by software and hardware bugs (Oops, BUG(), panic). The kernel then responds by dumping as much information as it can (processor state, stack trace and so on) to the console. This might be enough for an experienced kernel hacker to find out what went wrong, but some crashed requires an analyze of the memory dump of the kernel.

3. Netdump writes to /var/crash, and kernel dumps can take anywhere from 500MiB up to several GiB depending on amount of memory used on the client.
4. Start the netdump-server:

3. Propagate the shared secret to the server. This just copies the ssh public key to the crashdump server:

The above command just do:

At the netdump server, a client directory is created for dump files:

The kernel now crashes, but right before it reboots, it dumps to the netdump server (UDP port 6666). At the end of the dump, a SysRq-t is performed. SysRq-t dumps a list of current tasks and their information.

Note! While the dumping is in progress, interrupts are disabled. One consequence of this is that the keyboard is unresponsive. 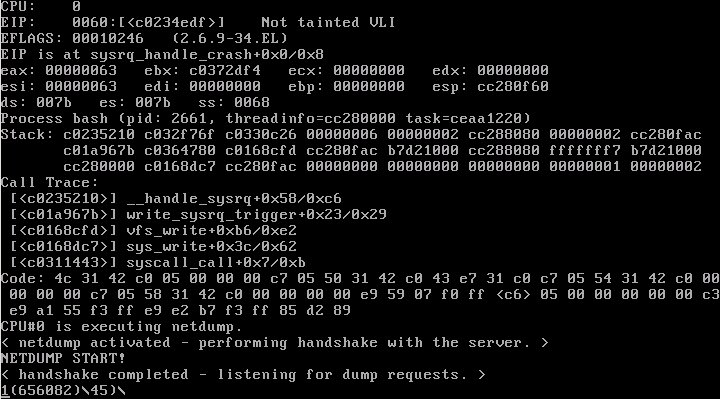 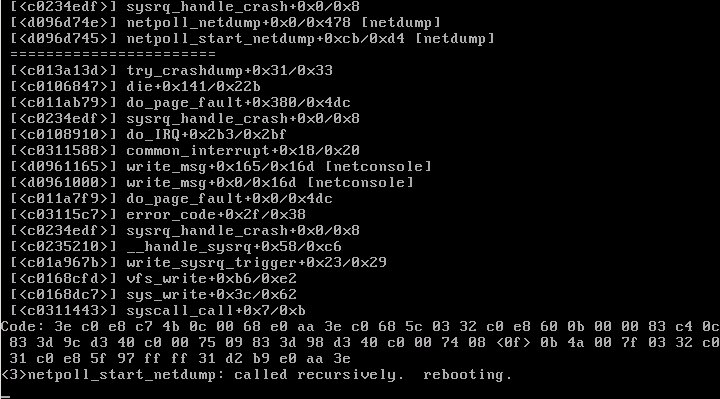 At the server, two files are generated:

You can now analyze the dump ("vmcore") using gdb, kdb or similar to figure out what went wrong. Enjoy!
Posted by Unknown at 24.6.07

Email ThisBlogThis!Share to TwitterShare to FacebookShare to Pinterest
Labels: linux